We are looking for volunteers who can help raise funds for the China-Africa Peace Initiative (CAPI). The volunteers will help research and identify possible individuals, companies and organizations that can donate to the CAPI program, and then work with us to contact them.

Interested applicants should scroll down the page to read more about the opportunity and requirements, and if they meet the criteria, they should:

Click on the “Apply Now” button at the end of this page to fill out an application form.

Applicants coming from the United Nations Online Volunteers (UNV) platform will have the opportunity to link this form to the application they’ve already made at UNV.
UNV applicants should use the Motivation section on their UNV application to show that they understand the objective of this work.

The volunteer can be from any country but should be fluent in English language and be able to use WhatsApp to communicate with us.
Proficiency in Chinese language is desired but not mandatory.
No prior fundraising experience is required but a volunteer should have the ability to work independently, think up ideas, solve problems, be flexible in approach and result-oriented, be able to meet deadlines and targets, create catchy marketing materials, be able to write properly, etc.
Volunteer should also have or be able to setup a PayPal account to facilitate the fundraising if need arises.

There is no monetary compensation or reimbursement for this role.
However, to volunteers who work hard to achieve their assignment in a manner that we consider satisfactory, we will be happy to issue Volunteer Certificates in appreciation of their efforts and as proof of the good work that they have done toward improving the relations between China and Africa and also in preventing conflict and promoting world peace.

Details
There has been increasing hate in the African continent against Chinese after videos went viral on social media that showed how some African nationals living in the Guangdong province of China were evicted from their homes and hotels and thrown into the streets for several days over Coronavirus misunderstanding.

Due to false representation in the social media, the incident in Guangdong was misjudged and had majority of Africans buying into the belief that Chinese are racist, hate blacks, are only in African to cart away resources and enslave Africans, and are therefore an evil sect that must be done away with.

To douse the tension and prevent reprisal attacks on the lives, properties and businesses of the between 1-10 million Chinese resident in Africa, now or in the future (due to built up hate), PASDO launched the China-Africa Peace Initiative (CAPI).

Under CAPI, some well-meaning Chinese volunteers have produced more than one hundred videos in which they send their empathy to Africans while affirming their non-hatred for blacks, restating the position of the Chinese government that China treats all foreigners equally, and calling for friendship.

The videos are made in English, French and about 22 other indigenous languages spoken in African countries that have a combined population of 1.2 billion people.

Comments and reactions from Africans on the few CAPI videos resealed so far on social media show high acceptability and good potential to douse the hate.
The imperfection in the way the noble Chinese participants speak the African languages seems to provoke surprise, smile and even laughter among the Africans – the kind of positive energy PASDO needs Africans to give off towards Chinese in order to douse the tensions. Yet the underlying message of peace and friendship doesn’t get lost as some of the comments reveal.

But, one problem remains – how to get the videos to the target audience through social media.
The videos can only reach a good number of Africans on social media if they are promoted as sponsored posts through paying the social media platforms, and funding is huge and way beyond what PASDO’s current budget can cater for.

Hence the need to engage volunteers to help raise funds for the CAPI program.

Overview of number of views and reactions from the audience on one of the CAPI videos posted on PASDO's Facebook page. 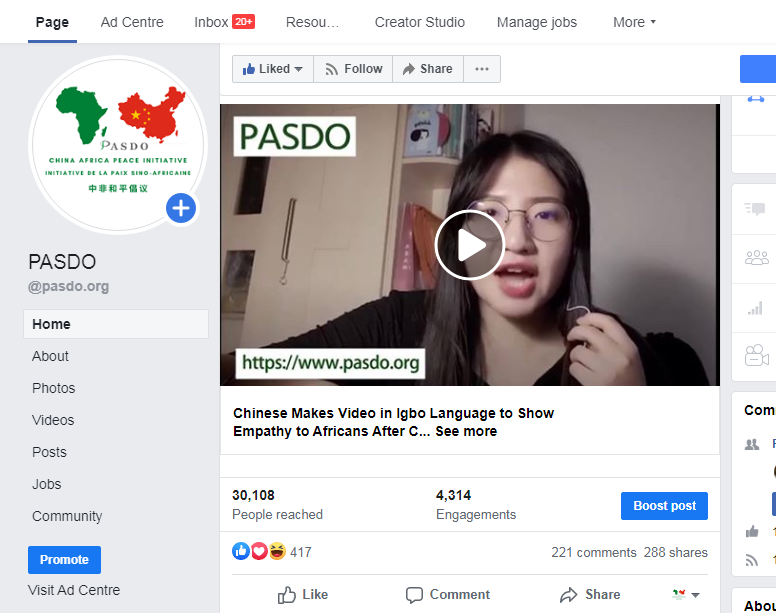 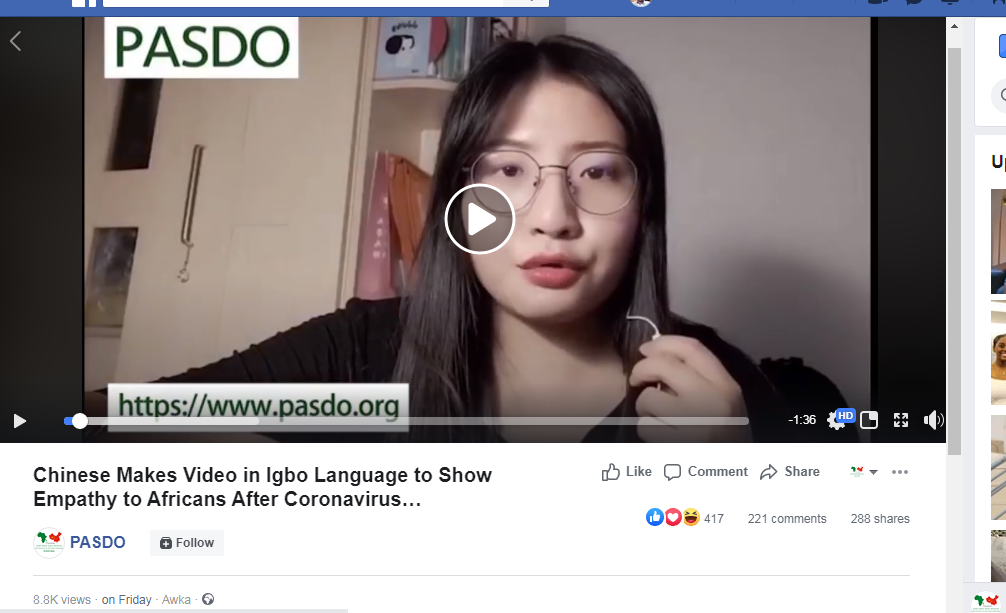